Welcome to our site dedicated to a unique variety - Cirneco Dell Etna. My name is Julia Samsonova. My dogs, Thor, Sahara and Olaf, represent this breed in Belgium. They are a small part of the wonderful world, where the sun was embodied by the dogs, the Cirneco Dell Etna breed. These "Sunny Bunny's" with their aristocratic appearance embody athletic effectiveness. The task of the cirneco breeders is to preserve this perfection. My dear assistant is Anastasia Belova. She represent the cirneco breed in Russia. She has two bitches Stella and Colisto's Tullia.

We represent a part of the cirneco breeders' team. The breeders breed two different types of cirneco, but they are united by striving to preserve and improve the Cirneco Dell’Etna variety. We are willing to help you get acquainted with the various breeders of Cirneco;

They come from Italy, Russia, Finland, America. We offer you the opportunity to choose a puppy on our site, exactly the one you need. Will it be a dog to work as a hunter, from Italy, a worthy competitor for the dog show, or just a sweet companion.

Thanks to the diversity of the breeders in our team, we can offer the dogs for different purposes. There are petite and smaller types for exhibitions, the rougher and larger for coursing, the ferocious hunters and also we report the less qualitative dogs to the buyer. 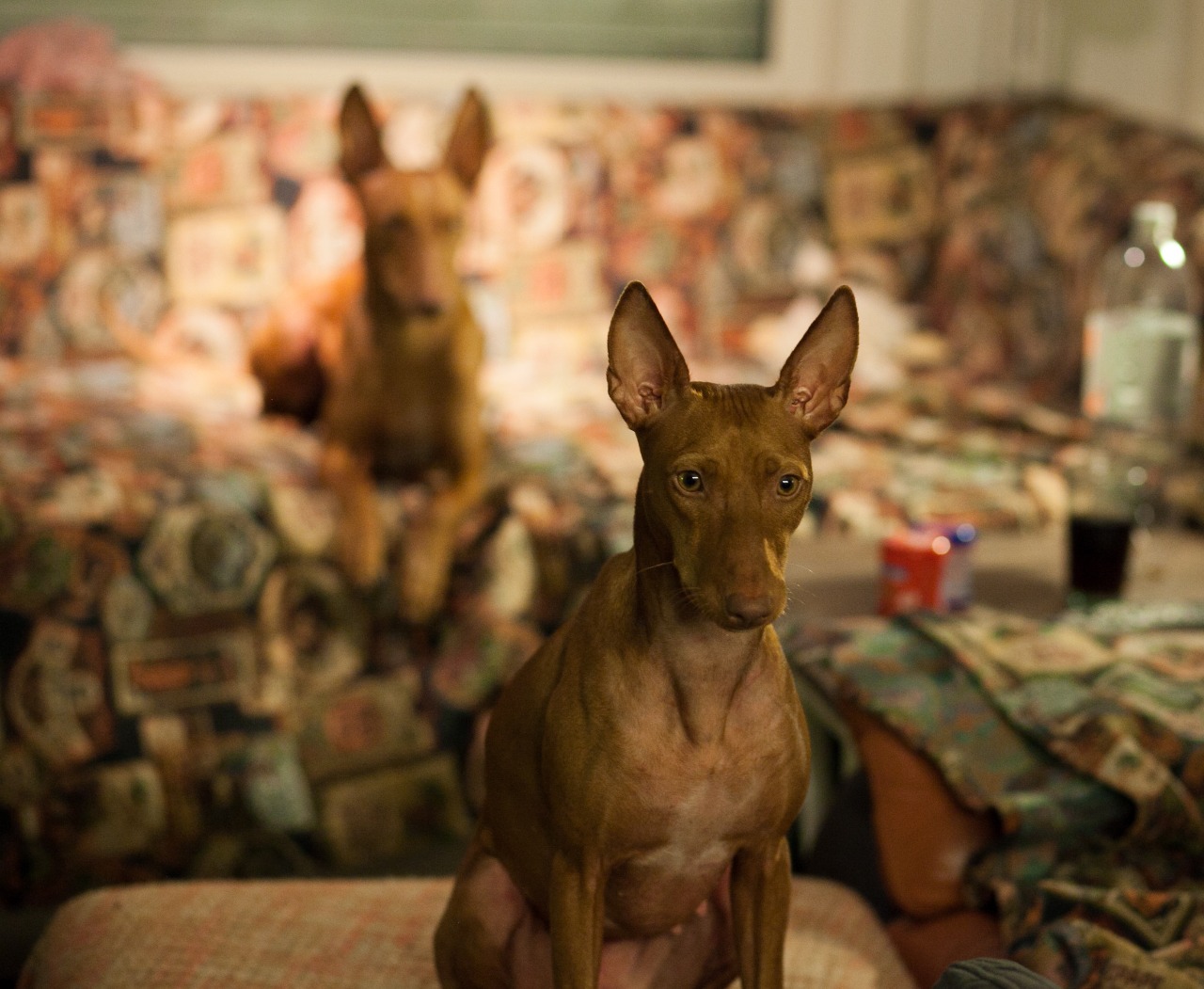 Types of Cirneco Dell'Etna. (From the book of Giuseppe Urzi adapted by Tatiana Butt)

In Sicily, Cirnechi always divided and separated into two interbreed types of  - southern and northern. 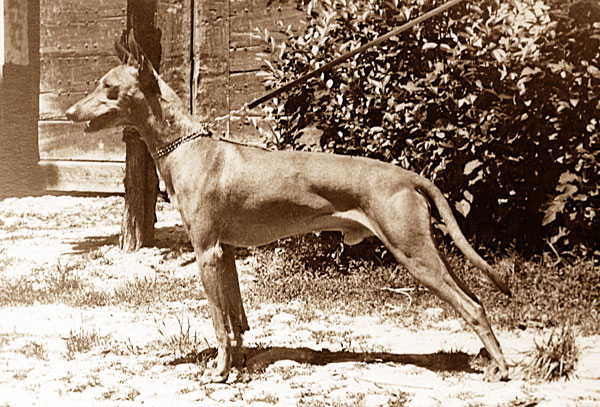 A picture of a southern type

(around 1950)
A modern southern type here under

Dogs of this type of live and hunt around the city of Catania, at the foot of Etna, such as villages and towns: Viagrande, Zafferana, Milo, Linguaglossa, Randazzo, Bronte, Belpasso, Paterno - it is a small sized dog, a bright red color with small white markings on the chest, on the fingers, you can find dogs with a white mask on the face and the so-called "star on the forehead." Required, set high, not large triangular ears with tough cartilage. Striking head with flat skull, the eyes almond shaped, well filled muzzle, long and sharp, with a fairly strong but graceful neck. Graceful, strong, compact, not large and very hardy dog. The coat is hard, vitreous, dense. South interbreed type Cirneco, hunts in very difficult conditions, in the rocky terrain, looking for the rabbit in the voids between the red-hot lava from the scorching sun, in the thorny blackberry bush for hours while in the sun. Dogs have to jump over, climb, to penetrate into crevices and voids between pieces of frozen lava. 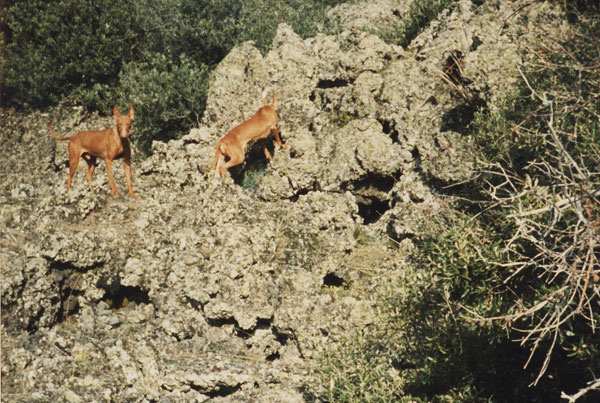 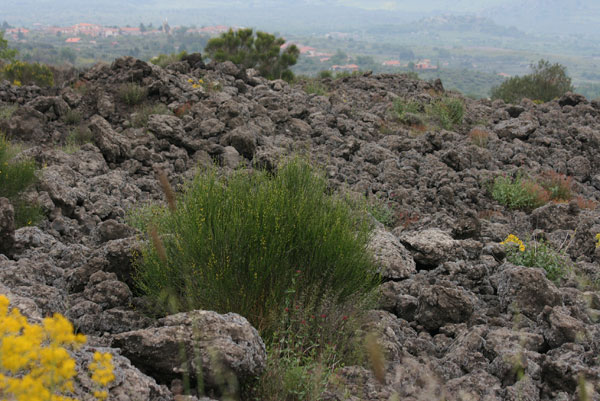 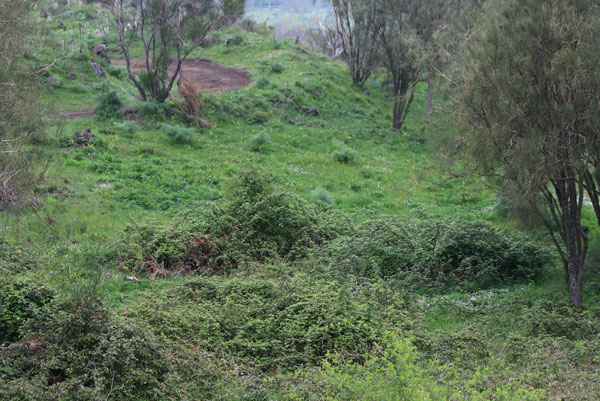 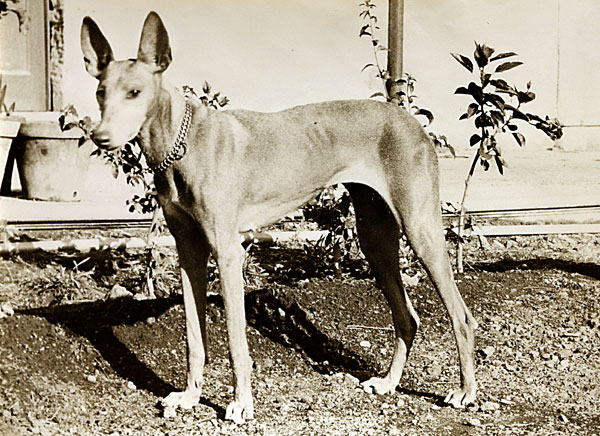 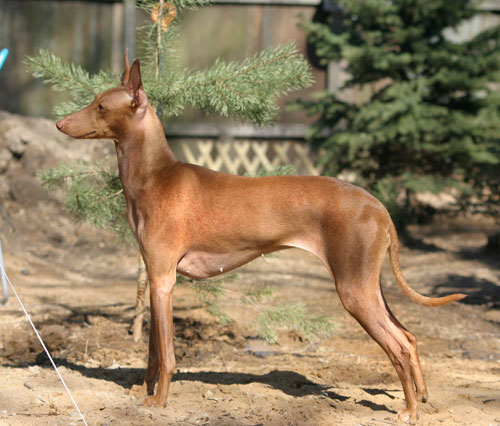 Away from the Etna, in the central part of Sicily and the coast, such as the regions and cities - Palermo, Palagonia, Ramacca, Raddusa, Caltagirone, Taormina - Cirnechi completely different type. Preference is given to higher dogs, light color wool, with the presence of large white markings up to the white neck and chest, large triangular ears, frequent soft cartilage and high ear set. For dogs of this type is characterized by: high on, fry, stretched and elongated tapered head, refinement, a lighter skeleton than the "southern intrabreed type." Wool is a soft and delicate. This interbreed type developed due to changes in the terrain, and the method of hunting dogs of this type are valuable for poachers, since this method of hunting easier. 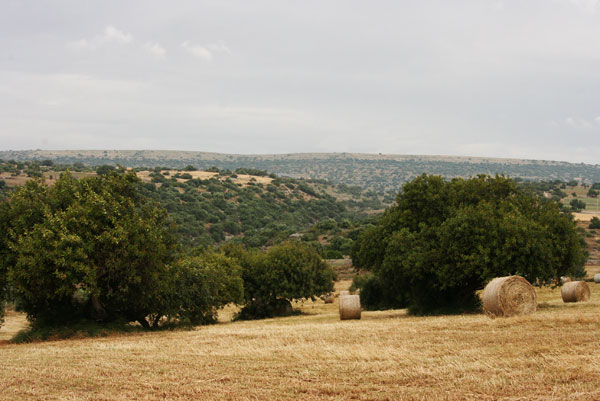 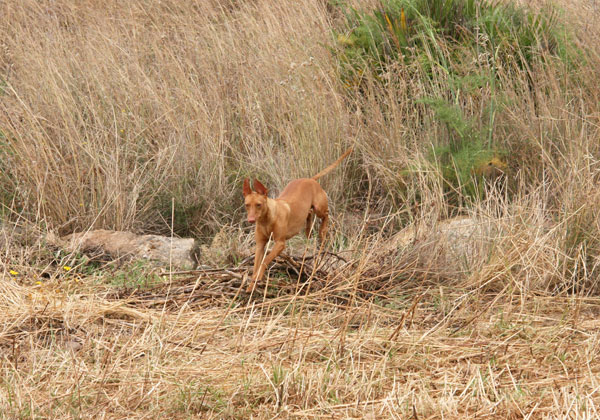 Originally used to hunt rabbits and other small game on rough ground formed by molten lava, these trim, muscular dogs rely on sight, scent and hearing to track their prey. They are known for their stamina, swiftness and springy gait, which help them to navigate treacherous terrain with relative ease. Bred to hunt for days in extreme heat without access to food or water, the Cirneco is an extraordinarily hardy and resilient dog. Its attentive, affectionate, adaptable disposition makes it a good companion for active families. Despite the efforts of breed aficionados, the Cirneco is still rare outside of Sicily and has not achieved the popularity of its larger Pharaoh Hound and Ibizan Hound cousins.

The Cirneco dell'Etna is a small- to medium-sized elegant hunting dog with exaggerated ears, a long pointy muzzle and a stunning coat. The Cirnechi’s tall, triangular ears, which can be up to one-half the length of its head, are set very high and close together. They must be held erect (“pricked”) and rigid, parallel or almost parallel, when the dog is alert. Droopy ears, or “bat ears,” disqualify the dog from show competition. The Cirneco has a strong, well-arched neck. Its body is lean and elegant, athletic and muscular. Its ribcage is slightly sprung and fairly narrow, although it should never be flat. The Cirnechi’s thick, long, low-set tail is carried high and curved during motion, and sabre-like when standing still. It should never curl tightly over the back. The feet should be strong and oval, without dewclaws on the hind legs. Dewclaws on the forelegs should not be removed. The Cirnechi’s paw pads should be brown or flesh colored, with nails of matching color. Black nails or foot pads are a breed disqualification. This is a long-legged breed, with a kind oval eye and an alert expression. It is often confused with the Pharaoh Hound, to which it bears a striking resemblance. However, the Cirneco is substantially smaller, both in stature and weight, and has a more squared-off profile.

The ideal male Cirneco dell'Etna measures between 18 and 19¾ inches at the withers, although dogs between 17¼ and 20½ inches in height are tolerated under the AKC breed standard. Females ideally stand between 16½ and 18 inches tall, with heights from 15¾ to 19¾ inches being allowed in the American show ring. Both males and females typically weigh between 17 and 27 pounds.

The Cirneco’s coat is short on the head, ears and legs and usually a bit longer but still sleek and close on the body. It can be fine or slightly coarse and should have no feathering. One of the most striking characteristics of the Cirneco is its beautiful, shiny, solid-colored coat, which preferably ranges from a rich tan to a deep chestnut. It can have a mixture of slightly lighter and darker hairs, with or without white patches on the face, chest, belly, feet and/or tail tip. Dogs that are solid white, white with orange patches, or any color with a white collar are accepted but less desirable under the AKC breed standard. Cirnechi that are solid brown or liver, and those with brown patches, brindle coats or any black patches, hairs, pigmentation or mucous membranes, are disqualified from the show ring. The extremely short hair coat of this breed makes it especially susceptible to the cold. These dogs should wear a sweater or coat if they are exposed to damp, chilly weather for any length of time. Cirnechi are indoor dogs that are not well-suited to living in cold climates.

The Cirneco dell'Etna is a low-maintenance breed. Its short coat only needs an occasional brushing to keep it tidy and clean. A rubber curry brush or hound glove, or even a warm damp cloth, work well to keep its coat looking shiny and lustrous. Frequent bathing is not necessary and really should only be done when the dog is obviously smelly or dirty. Other routine maintenance is the same as for most breeds, including dental care to keep teeth clean, reduce plaque build-up and prevent bad breath. Regular nail clipping is also important. Many sighthounds, including many Cirnechi, are sensitive to having their feet handled. Nail care should start at a very young age, so that it does not become a struggle. Owners should do their best to avoid cutting into the quick of the nail, which is quite painful for the animal. For those who are not comfortable clipping nails, a quick trip to a professional groomer can be a godsend for both owner and dog.

The Cirneco dell'Etna has a strong, inquisitive, independent temperament, which is important in keen hunting dogs. It is also outgoing, friendly, affectionate and smart. Cirnechi are loyal and loving with their owners and friends. They are willing and eager to please and love to receive pets and praise. They usually make great family pets, although they can be reserved around strangers. The Cirneco is an extremely adaptable breed that can thrive in a wide variety of environments. However, these are house dogs that definitely need to live indoors due to their short coats, thin skin and absence of body fat. They like to nestle on warm soft furniture, blankets and bedding, almost as much as they like to snuggle with their favorite people. Cirnechi typically are tolerant of children, although this is not a bomb-proof breed and probably isn’t the best choice for families with very young kids. Cirnechi are social animals that tend to get along well with other dogs. They rarely cause problems in multiple-pet homes and, unlike most sighthounds, get along remarkably well with familiar cats. Of course, the earlier any dog is exposed to other household pets and small children, the more likely it is to get along with them as they age.

Cirnechi are high-energy animals that need quite a bit of regular exercise to keep them physically and mentally fit. They love taking long daily walks and having a chance to stretch their legs in safely-enclosed areas. It is important for Cirneco owners to have well-fenced yards, so that their dogs can run freely and burn off excess energy, which usually happens in short bursts. While they can be gregarious and playful, Cirnechi usually are calm and quiet, both indoors and out, as long as their exercise needs are met. They are great fans of toys of all sorts. A Cirneco can play with a single toy for hours, keeping it out of mischief. Cirnechi are active contestants in lure coursing and agility competitions. Participation in these and other canine sporting events provides a great opportunity to showcase the Cirneco’s athleticism, while at the same time giving him a chance to get physical exercise and canine socialization.

The Cirneco is extremely bright and responds well to gentle, positive training methods. It is considered to be easier to train than many of its sighthound cousins. Because of the breed's intelligence, it can do well with both long and short training sessions. However, short sessions seem to be better, since these dogs can become bored and inattentive if training lasts too long. This is a terrific breed for agility and lure coursing competitions, due to its superior speed, nimbleness and “smarts.”

As sighthounds, Cirnechi are extremely observant and instinctively programmed to dart after almost any small thing that moves. Because they are natural chasers, Cirnechi should be kept in safely-enclosed areas, preferably surrounded by a tall solid fence that they cannot climb over, jumpe over or wiggle through. An underground or above-ground electric fence is not a wise containment option for this breed, as Cirnechi are also keen diggers, going back to their rodent- and rabbit-hunting roots. The Cirneco dell'Etna can become depressed or destructive if it doesn’t get enough exercise and human attention. If an owner cannot spend lots of time with his Cirneco every day, this breed is not a good choice.